Lukashenko: Decisions of Belarusian People's Congress will not be spontaneous and unexpected 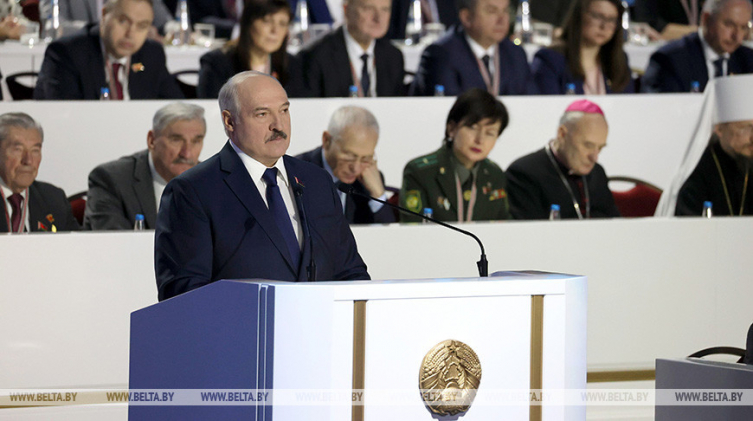 The decisions of the Belarusian People's Congress will not be spontaneous and unexpected as a lot of preparatory work was carried out in the run-up to the forum, including in the format of dialogue platforms, Belarus President Aleksandr Lukashenko said as he addressed the 6th Belarusian People's Congress in Minsk on 11 February, BelTA has learned.

The head of state noted that for the sixth time in the sovereign history of the country the government has turned directly to the people to discuss and take consolidated decisions on the further development of the country and society. “Today, delegates from all over Belarus, representatives of various professions and social groups have gathered here. Behind each of you are your constituents; enterprises, public organizations. These are millions of people who have given you their voice to discuss and make big decisions for the future of our Belarus. These decisions will not be spontaneous and unexpected for us and for society," the president said. He recalled that preparations for the congress were several months long. People's opinions and concerns were studied; dialogue platforms were actively working in the regions. "We have not hidden anything, we have something to discuss today," Aleksandr Lukashenko said.

The priority topic for the discussion, according to the president, is economy, achievements and possible shortcomings. "The main thing is the reserves we can tap into and the concrete proposals for further development," the head of state said.

"How can we move forward amid the pandemic and external pressure? What measures should we take to ensure economic growth and decent standards of living for people, social support?” he continued. “This is the basis of our economic model, the essence of the Belarusian welfare state. Suggestions and ideas can be any. Not only those that we, the leadership of the country and the government, offer. I just ask one thing, and you know it well. I repeat: everything must be open and feasible, we have no one to be afraid of."