After reconstruction, a section of the road P23 Minsk - Mikashevichi was opened 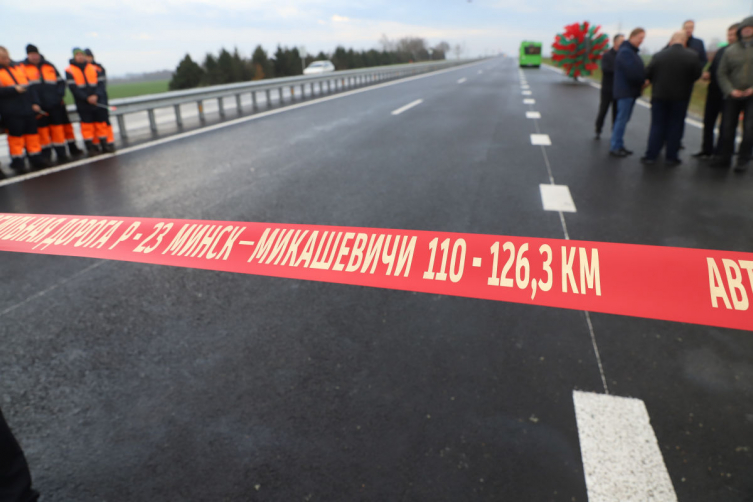 The opening ceremony with the participation of the Prime Minister of Belarus Roman Golovchenko and the Chairman of Minsk Region Executive Committee Alexander Turchin was held on the 110th km of the P23 highway.

From a two-lane road it became a four-lane road. This is due to the fact that there is a very high traffic intensity on this section. Today it is 8.5 thousand cars per day. When asked why the road was reconstructed directly to Starobin, Alexey Avramenko answered:

- A lot of Starobin residents work in Soligorsk. And, of course, this site will be in demand in the near future.

- In 2021, we repaired about 1,300 roads along local roads in the republic. Plus, today we are introducing a section of the road to Smolevichi. In total, more than 30 km of republican roads will be commissioned. Plus, about 700 km more by the end of the year, current and major repairs will be carried out, - said the Minister of Transport. - Plans until 2025 - to reconstruct 485 km of roads. These are our main directions to Borisov, M8 from Orsha to Vitebsk, this is bypassing Mogilev, Vitebsk and Mir. Also, the reconstruction of the section of the M10 and P99 highways will be carried out.

- Of course, everything worked out. You see this with your own eyes today. We tried to build the facility even ahead of schedule, which was planned for the project. It will be convenient for people to use, and the national economy will receive only advantages. Now it will become even more comfortable to deliver people and goods safely and quickly to their destination. Delivery time will be shortened. On this section of the road, a high-speed mode is introduced, which will allow people to move faster from point to point. The road is of the first category. There are also two small bridges built over small rivers. Everything that was planned was completed on time and with quality. And the funds were invested much less than according to the estimate - 78.4 million rubles out of the planned 90 million. Now, together with the Belaruskali enterprise, we plan to improve the next section, which will run almost to Starobin. We are actively working on this issue now. A construction project is being prepared with the participation of Belaruskali. As soon as the financing issues are resolved, work will begin.

Prime Minister of Belarus Roman Golovchenko noted that it has become a good tradition in our country by November 7 - the Day of the October Revolution - to commission new transport, industrial, social facilities, to repair and reconstruct them. This year was no exception. This suggests that the country is living, developing, plans are being implemented to create comfortable conditions, infrastructure for business and citizens.

- Today we are at a very important facility, first of all for the Minsk region, - Roman Golovchenko emphasized. - This is another example of the significant work that is being carried out to reconstruct the main highways that connect Minsk with regional centers. In the southern part of the central region, where a large number of industrial enterprises are concentrated, which are of strategic importance for the development of the country, the well-being of our citizens, we are opening a new section of the road. It creates comfortable and safe conditions for movement in the direction of such large industrial centers as Soligorsk and Mikashevichi.

- In a little more than a year, Belarusian road workers completed 15 km of the road, erecting a four-lane highway. This is another example of fast and efficient work of the customer in the person of Minskavtodor and the contractor of the Belavtodor holding. The teams of these organizations, who worked hard at the facility, of course, deserve gratitude.

- I think everyone understands that roads for any country are blood arteries that connect different points on the map of our republic,” the Prime Minister of Belarus noted. “They optimize the pace of development of its regions, create conditions for a comfortable life for citizens. I am convinced that the section of the highway that is being opened today on the eve of November 7 will be another good stage in building a strong and prosperous state - our homeland, the Republic of Belarus.

The motor road of the road P23 Minsk - Mikashevichi is of republican significance and is part of the network of international roads of the CIS. The section from 74 to 126 km is located on the territory of the Minsk region, namely in the Slutsk and Soligorsk regions.