"Positive impressions from the car and the road!" Turchin opened a section of the P53 Sloboda - Novosady highway 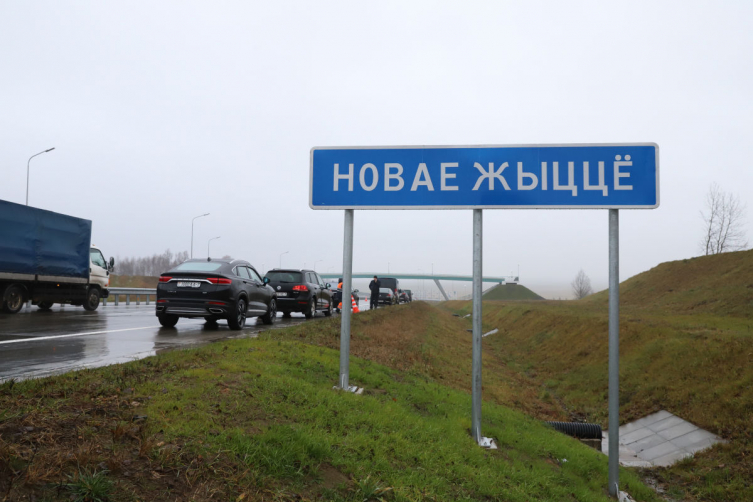 Many were waiting for a new road from the village of Novaya Zhizn to Smolevichi. The old highway could not cope with the large traffic flow, as a result - frequent accidents and road accidents. And there are really enough road users: these are residents of settlements nearby to Minsk, who come here to work. And the new settlers who built housing in Smolevichi. Moreover, the satellite city is expanding, the population is increasing.

Now it will be much easier and faster for motorists to get to the capital. The new road has the first category, after reconstruction it became four-lane: two lanes in each direction. Crossings on the road to Smolevichi are made at different levels. This guarantees traffic safety, because villages are adjacent to the highway. For the same purpose, an overpass, underground and overground pedestrian crossings, a transport tunnel, and a protective fence have been equipped. There are bus stops with car pavilions along the road. The actual cost of the facility was 62.3 million rubles.

— The P53 road is of great strategic importance, as it connects the largest industrial cities of the Minsk region with the capital. This is the most important link in the economic system. Do not forget about the satellite city of Smolevichi, where today housing and social infrastructure are being actively built, the population is growing and, accordingly, traffic between Smolevichi and Minsk is increasing, - said Alexander Turchin. - I remember the road that was here: narrow cable divisions, sometimes a tractor drives ahead. It took too long to drive this section of the road. Now it is a completely different matter: after the reconstruction, the speed of movement, the comfort of movement have increased, and economic ties between the regions have increased. Here we can cite the example of the United States: whenever difficult times come, it is necessary to implement some kind of infrastructure projects, build roads. Perhaps this is still the right decision. It is not for nothing that now in the states, a trillion two hundred billion dollars will be directed specifically to development and to the creation of new infrastructure.

The head of the capital region stressed: this is only the next stage of the road reconstruction.

— I am sure that together with Aleksey Avramenko we will continue to work on the road arrangement in the same design to our industrial centers: Zhodino and Borisov. Enterprises are being built, the intensity of traffic is growing, and for us such roads are a great gift from the state. Last year, when the President visited the Smolevichi Broiler dairy farm, our work was actually started. Therefore, I am sure that the head of state will continue further undertakings in these matters, - said Alexander Turchin.

By the way, as the Minister of Transport and Communications of Belarus Aleksey Avramenko said, during the reconstruction of the P53 road, new technologies and materials were used - a two-layer coating of cement and concrete. The track meets all European requirements.

Cement-concrete pavement is much more durable and wear-resistant than, say, asphalt. On the other hand, a kilometer of a concrete road is more expensive than an asphalt one, but in the long run it makes sense. It is due to the long overhaul period. In other words, it will be cheaper to maintain the new road.

— Today we started developing a project on the section from Smolevichi to Zhodino, and further in the plans from Zhodino to Borisov. I think that sometime in February 2022, the design and estimate documentation will be ready, now we are determining the sources of funding in order to continue the reconstruction of this heavily loaded section of the road - the minister assured.

However, it is still difficult to objectively assess the quality of the road when you act as a pedestrian. Alexander Turchin personally inspected the restored section of P53, sitting (for the first time, by the way) behind the wheel of a Belarusian-made electric car. After the trip, he shared his impressions.

— Impressions are very positive: both from the car and from the road! My colleagues and I have already discussed: the noise level is much lower than on the first roads, when we built them with concrete pavement. Technology is so advanced that the noise component that was on the first roads.