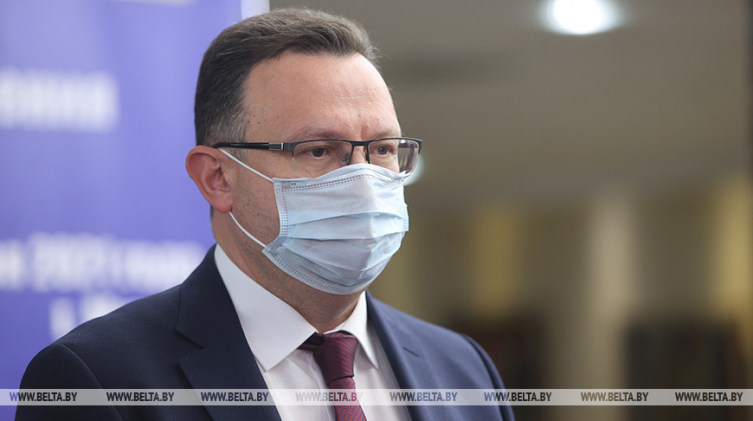 Belarus is set to launch full-cycle production of Russia's Sputnik V vaccine by the end of the year, Healthcare Minister Dmitry Pinevich told reporters on the sidelines of the 34th session of the CIS Healthcare Cooperation Council that is underway in Minsk on 13-14 October, BelTA has learned.

“The full-cycle production of Russia's Sputnik V vaccine will begin on the premises of the Belmedpreparaty pharmaceutical company on Aranskaya Street by the end of this year,” Dmitry Pinevich informed.

The minister did not specify the projected output of this vaccine. “Our number one task now is to make sure it will be a high-quality vaccine. It must fully replicate the existing vaccine,” he said.

Dmitry Pinevich emphasized that the production facility that will make Sputnik V can be easily localized to produce the Sputnik Light vaccine.

“We purchased the Sputnik Light vaccine. Now we are using it quite actively. Its localization will be needed only when it becomes clear that Sputnik Light is widely used and that localization makes economic sense. In addition to Sputnik Light, our counterparts, strategic partners from the Russian Federation are also developing children's vaccines based on Sputnik V.

The 34th session of the CIS Healthcare Cooperation Council is taking place in Minsk on 13-14 October.

Members of the council are healthcare ministers and chief state sanitary inspectors. Attending the session are also WHO Regional Director for Europe Hans Kluge, and UNAIDS Regional Director for Eastern Europe and Central Asia Alexander Goliusov. Hans Kluge is expected to share his views on the lessons learned from the COVID-19 pandemic in the context of emergency preparedness and response.